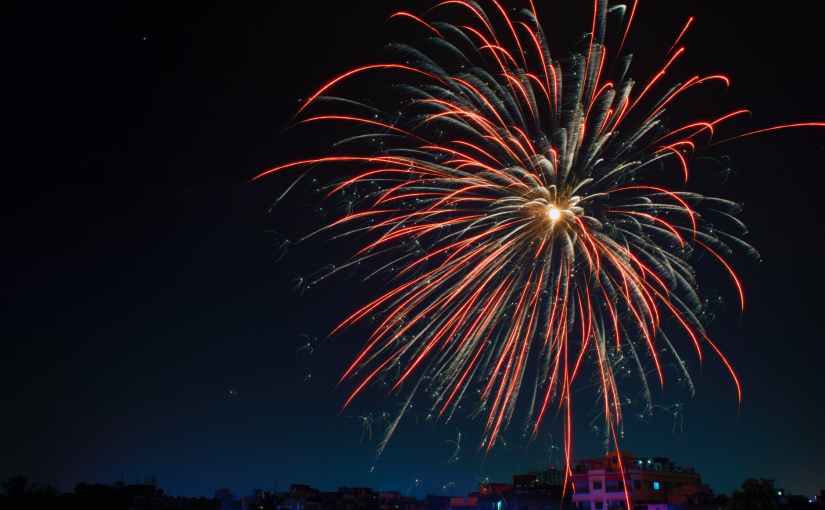 Heat seared towards me on the tails of red sparks. I was in the wrong end of a firework shot towards the ground rather than away from it. It felt like one of those moments you see in an apocalypse movie. I was going to die. We all were. But when I looked up at the woman, I noticed her eyes for the first time. Large, but not in a looming kind of way. They were black but a gentle black with a twinkle, like a diamond sat in each of them. You’d think she would have realized what she had done. You’d think there would be an expression of guilt, or at least one of panic. But nothing. She just waited.

And then the shower fell to the earth all around the awning. It looked like handfuls of sparklers falling to the ground and extinguishing in puddles. Steam curled up in snakelike tendrils from where each spark had landed. There was some hissing for a bit and then nothing. Silence except for a dented pop can being pushed across the pavement down the street.

I thought that when I looked up she would be gone, like she had never been there. Just a constellation outlining a shape I had imagined. But she was, and was staring down at me knowlingly, like we had known each other my whole life. She smiled and I saw rows of pearls, real pearls.

Arori, I thought. I didn’t understand where that came from. My name is Arori. I looked over my shoulder for somebody. Up here. She smiled again.

She nodded and turned away from me, spreading pink, orange, and yellow across the sky. It was most vibrant in the east and faded out into the west where she sat on the silver edge. Goodnight. But, it’s almost morning. I heard a laugh that sounded like a short melody. Maybe for you.

The lady waved a few multicolored fingers then hung onto the moon as it flipped around and the sun began to rise above a cloud like a child slowly peering out from under the blankets in the morning.